When I found out I was chatting to Fatboy Slim, I cant really say the word ‘naughty’ came immediately to mind. ‘Legend’ maybe, or ‘figurehead’ – some kind of drab hero-worship title that couldn’t really come close to articulating the impact that Norman Cook, Slim, has had on the dance music industry, electronic culture and my own nights as a munty and acne-ridden teen, desperately flailing for no reason other than bangers.

Yet chattingÂ with him, it appears that Norm is the personification of naughty. Quick witted, sassy and with unfailingly intelligent responses – things got spicy real quick. When he picked up the phone he was working on his set for his Australian tour that will smash the end of this month. Unsurprisingly, it will feature a tribute to the late David Bowie.

IC: Funnily enough I was just going to ask you about Bowie. How did he have an impact you?

FBS: I think he had an influence on pretty much everybody who heard his music â€“ not only through his music but in his contribution to culture and sexual politics. I was driving my son to school yesterday when the news broke and over the hour-long drive I was just going through all the things thinking â€˜yeah he did that, and he did thatâ€™. Heâ€™s an influence on all of us, but for me particularly, I was 10 when I saw him for the first time on Top of the Pops with makeup on and girls clothes. He was naughty and cheeky but also had really good tunes. I think, if thatâ€™s what you aspire to in a career â€“ to be naughty, cheeky and really good tunes and change the face of the world then he can die a happy man.

IC:Â What was your most beloved Bowie record?

FBS: Just reminiscing with a friend this morning made me remember Iâ€™ve had some of my formative and best sex to side 1 of Hunky Dory.

IC: You and me both Norm.

IC: Probs. I think the flamboyance that he so often explored was good forâ€¦losing inhibitions, lets say.

FBS: That album just went on a journey to so many different places. It was a real classic. As a soul and funk fan I really enjoyed the Philadelphia era. Those are probably my favourites, Golden Years, Fame and Sorrow and all that. Young Americans is one of the greatest records ever written. 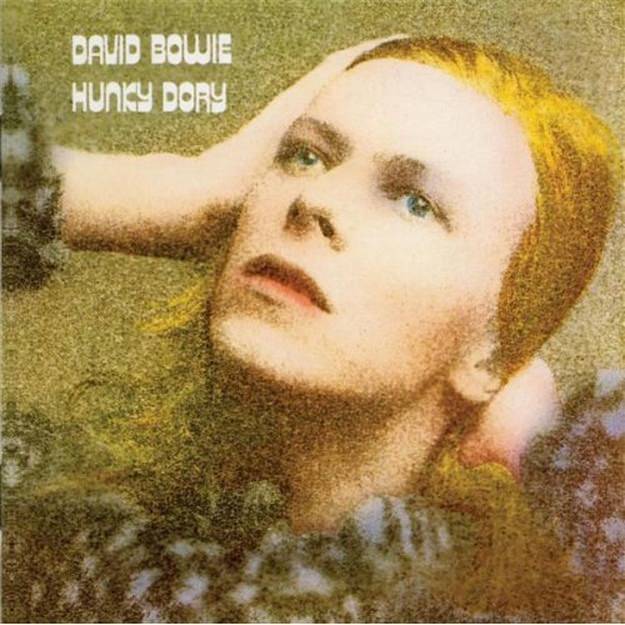 IC: Tell me everything about Smile High Club. What makes a good Fatboy Slim party?

FBS: What makes a good Fatboy Slim party is when we have the facilities and the finance to put on a Smile High Club. Thatâ€™s when we can turn a gig into a party into a really funny stupid party. Iâ€™d played the main stage at Creamfields one year and they asked me back straight away â€“ then they said that I could curate my own stage. I said that was great but I didnâ€™t want to just have the standard favourite DJs so we came up with the name Smile High Club which triggered a bunch of ideas where you get stupid. You get high and then you smile â€“ that to me is the recipe for a perfect party. Weâ€™ve done three of them now â€“ at Creamfields we did a huge flash mob human smiley and had a booth where we spray people yellow on the side of the stage and paint smileys on them.

IC: I like the symbol worship of it all â€“ very fun and sacrilegious. What was your first encounter with the Smiley?

FBS:It was during an LSD trip in about 1989 where things were going a bit pear shaped and me and the girlfriend were getting the fear a bit. I just happened to see a bunch of smiley patches for about 10p each â€“ so whenever we started to get a bit angsty we played with the smileys and went to smiley land. Itâ€™s just a very enduring symbol â€“ it makes people smile. Itâ€™s never really been in fashion so it canâ€™t go out of fashion. Its constantly there, itâ€™s a perennial goofy thing â€“ itâ€™s been around forever. Thatâ€™s why itâ€™s a perfect logo to represent me I guess.

IC: I feel like thereâ€™s something brashly political about it too.

FBS: I think of it more as a-political. To some it means counter culture â€“ like in the hippy days â€“ to some people itâ€™s more representative of 80s acid house. My daughter calls it the â€˜daddy faceâ€™.

IC: Well to get political if we could â€“ I want to talk about your set at Banksyâ€™s Dismaland. What do you think of Banksyâ€™s work? Would you say that you are a political person in any capacity?

FBS: Iâ€™m political in a very small way â€“ I donâ€™t have as many axes to grind as Banksy. I was very political and left wing when I started but over the years I was worn down. You canâ€™t change anything by shouting at people. I admire Banksy hideously. His sense of humour, his politics, the way heâ€™s become so successful doing something so wrong and underground and naughty – just the style in which he did it. When he asked me to play I had to keep it secret for 8 months. We had code words for the project and him and that all becomes part of the fun of it. It was the most beautifully surreal location to play in and everyone half-thought I was playing but didnâ€™t. It got outed that I was playing but even so on the day we put out a press release saying so-and-so cannot DJ tonight so weâ€™ve got a surprise DJ.

FBS: I just find him an inspiration and I absolutely love how he winds people up. He super annoys people but equally excites and invigorates people. Heâ€™s a genius. When I was DJing I knew he was in the crowd but his disguise was so good that I couldnâ€™t even tell who he was. He was bloody winding me up.

IC: Youâ€™re such a fucking dance legend and youâ€™ve really had a good long stint. Weâ€™ve had a big shift in culture over the years â€“ what ethos of rave culture from your early career do you think we should see a revival of?

FBS: I think EDM has confused things â€“ I think thereâ€™s still a basic primeval desire to go out and escape their normal lives. Get high, get laid, feel sexy â€“ just escape reality and experience that collective euphoria. The soundtrack of that might change over the years but the instinct remains. We had an acid house explosion, the big beat thing went crazy and we had a crazy time in America and then it all went underground again. If anything gets too commercial it regroups and comes back around again. Thereâ€™s always going to be a constant supply of 16-year-olds that want to go out and get naughty.

IC: I tend to think we live in a rotating culture â€“ the concept of mainstream is always fleeting yet recurrent.

FBS: And itâ€™s always cross-pollenating. People are always coming up with new hybrids of how to do it. EDM has kind of distorted the situation but at the same time itâ€™s turned on loads of kids in America onto hearing music they never would have heard and we could have gone on to talk about country and western all our lives.

IC: Thank god for that really.

FBS: And thank god for all the young people who still want to go out and get high and escape reality.

IC: Whatâ€™s would you say is your biggest passion?

Check out the Electric Gardens set times below. 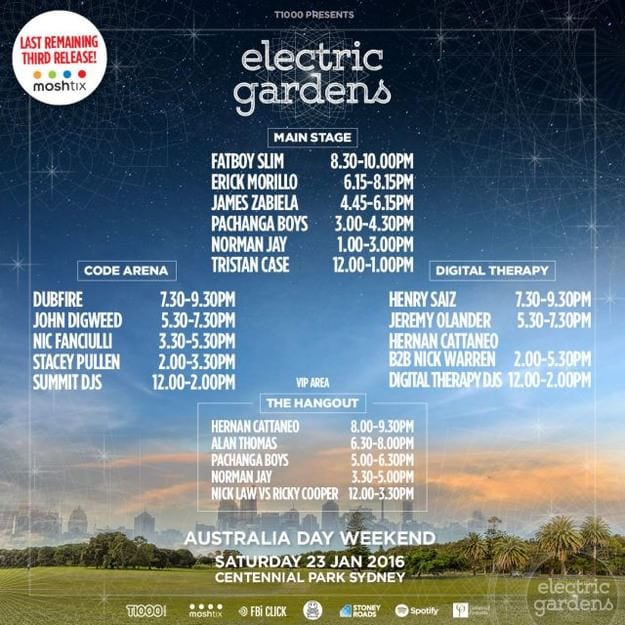 Posted on 22 january 2016 by James DeWeaver Norman Cook a.k.a. Fatboy Slim is back in Australia and we get to hear some very interesting stories and the reasons why and where “Fatboy” decides […]