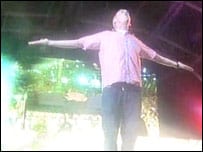 Fatboy Slim on stage Let it pour…Fatboy Slim said the gig was cold, wet and dangerous. Fatboy Slim has praised the 20,000 fans who braved torrential rain to party on Brighton seafront on New Year’s Day.

He took the stage at Big Beach Boutique 3 after sets from warm-up acts Naboo, The Cuban Brothers and David Guetta. “I love the people of Brighton – they stood there and took everything the elements could chuck at them and still partied on,” said the DJ.

Sussex Police said there were five arrests for minor offences and 20 casualties treated at the scene. More than 130 police officers paid for by the organisers were on duty at the event, in an enclosed area adjacent to the beach. Stewards on foot and a coastguard boat patrolled the beach. There was also a field hospital on site and two heated “warm-up” tents.

The DJ, real name Norman Cook, received several electric shocks from his equipment during the evening and said afterwards it was “cold, wet, dangerous but it went really well”. 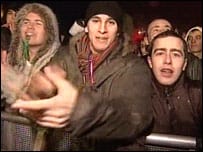 Fatboy fans Fans partied despite the weather and only five arrests were made.

Monday’s event was for ticket-holders only, with the 20,000 allocation being sold only to Brighton residents with a BN postcode. Police said its success was due to meticulous planning over the last six months by the organisers, Brighton and Hove City Council and the emergency services.

“I am delighted that the city hosted such a successful and safe event and that everyone had a great time in spite of the weather,” said council leader Simon Burgess.

January 20, 2016 by Kathy McCabe / National Music Writer/ News Corp Australia Network Living the dream … Norman Cook, the man behind Fatboy Slim, says he would be dead by now if he had […]

Curabitur Praesent odio dolor diam elit. sem, ultricies venenatis, consectetur consequat.UA-40734283-1
We use cookies to ensure that we give you the best experience on our website. If you continue to use this site we will assume that you are happy with it.OKPrivacy policy