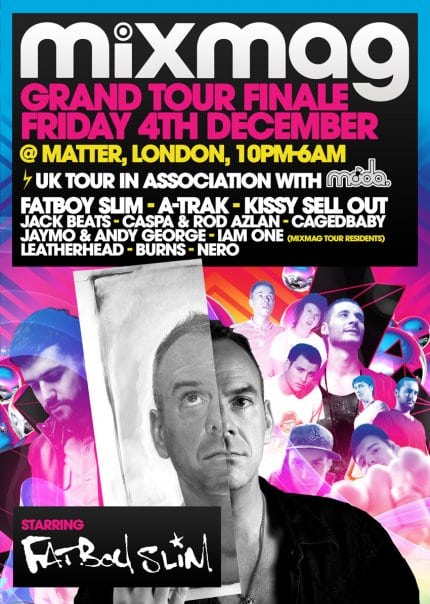 Mixmag is coming to a club near you. The world’s biggest-selling dance music magazine has organised the biggest club tour of 2009 with the hottest names in electronic music and beyond.

The legendary Fatboy Slim heads the bill of talent, which includes huge names in electro, house, dubstep, drum ‘n’ bass and everything in between â€“ plus the up-and-coming new stars of tomorrow.

Radio One’s Zane Lowe is set to play a number of dates alongside station mates Kissy Sell Out and Radio One’s ‘In New DJs We Trust’ residents Jaymo and Andy George, while white hot artists artists like A-Trak, Chase & Status and Laidback Luke will also join the party.

The tour doesn’t just have DJs. We’ve also got incredible live shows from Crystal Fighters, Rex the Dog, Evil Nine, Drums of Death, Delphic and Damian Lazarus. Not only that, established live acts like Friendly Fires, Hot Chip, The Kaiser Chiefs and The Pigeon Detectives will be flexing their DJing muscles.

The tour takes in 17 parties, the breadth of the country from Brighton to Glasgow. You’ll find us tearing up intimate venues like The Junction in Cambridge or filling epic superclubs like London’s Matter with all of the action reported on in MIxmag, Mixmag.net and Dontstayin.com. See you down the front!

Tickets to all the events can be found on www.dontstayin.com/tickets

at felis vel, ipsum libero venenatis massa mi, DonecUA-40734283-1
We use cookies to ensure that we give you the best experience on our website. If you continue to use this site we will assume that you are happy with it.OKPrivacy policy