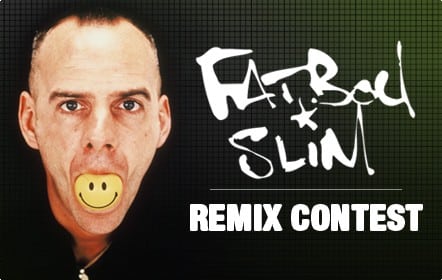 Skint Records and English DJ and record producer Norman Cook, better known as Fatboy Slim, are offering his â€˜Weapon Of Choiceâ€™ track to be remixed by Beatportâ€™s aspiring producers. â€˜Weapon Of Choiceâ€™ saw success on both UK and US charts and its accompanying music video, directed by Spike Jonze and featuring Christopher Walken, received cult-like praise.

Now is your chance to put your spin on the infamous track. The winning remix will be released on Fatboy Slimâ€™s Skint Records as well as receive free music downloads from Beatport and Open Labâ€™s professional studio tool â€˜DBeatâ€™, a grand prize package worth over $4000.

Starting March 16th, 2010, Beatport users are able to download the remix parts of Fatboy Slimâ€™s â€˜Weapon Of Choiceâ€™, and then remix it, before uploading it to Beatportal for the voting round.

The winners will be divided into 2 categories; 10 user voted (based on the highest number of spins) and 10 editorâ€™s favorites (picked by Beatportâ€™s internal music staff). From these 20 nominees, Skint Records will choose their favorite winning remix, to be released on their label. The winner will also receive a $200 Beatport gift card and Open Labâ€™s professional studio tool â€˜DBeatâ€™.

Special thanks to Rory

Everybody Needs A 303 (Plump DJs Remix)

For those who never heard the 303 Plump DJs mix (it will be on the TOPOJ single out this 12th june), i post the extract that i recorded from the Pete Tong Live Show (BBC […]