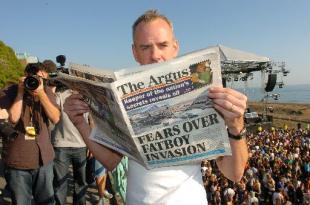 Fatboy Slim will return to Brighton for his fifth Big Beach Boutique party.

Brighton and Hove City Council has earmarked September 4 and 5 for the latest of the DJ’s seafront gigs.

In a report to Councillor David Smith, cabinet member for culture, the council has confirmed plans to close Madeira Drive for the event.

A separate report to the council’s cabinet will be drafted once full details are received.

A licence will also need to be approved by councillors.

Organiser Loud Sound has told police it will cut the number of revellers for future events and rearrange the site following safety concerns at the 2008 gig.

This is a question put to Carl Cox in February 2008 edition of mixmag: Who is the king of Hawaiian shirts,you or Norman Cook ? "Fatboy for sure. I don't mind 'em. I think they […]

By Time Out Dubai staff 23 December 2015 Â  If you were writing a list of DJs guaranteed to get dancefloors filled, Fatboy Slim would be near the top. The legendary producer and hit-maker (aka […]

fringilla dictum quis Praesent justo velit, felis Nullam inUA-40734283-1
We use cookies to ensure that we give you the best experience on our website. If you continue to use this site we will assume that you are happy with it.OKPrivacy policy