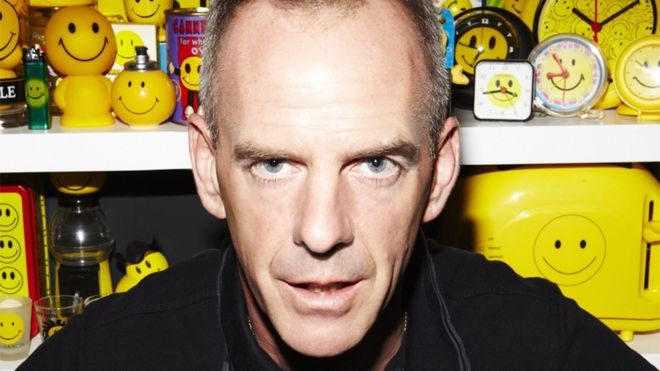 With hits like Praise You and The Rockerfeller Skank, Fatboy Slim popularised big beat in the 1990s.

Along with the Chemical Brothers and The Prodigy, he disproved the idea that dance music couldn’t sell albums, and helped to establish modern DJ culture.

Twenty years later, Fatboy remains the most successful pseudonym of songwriter Norman Cook – whose other projects include The Housemartins, Beats International and Freak Power.

To celebrate two decades of dance, Cook opened up his photo album to the BBC.

The birth of Fatboy Slim 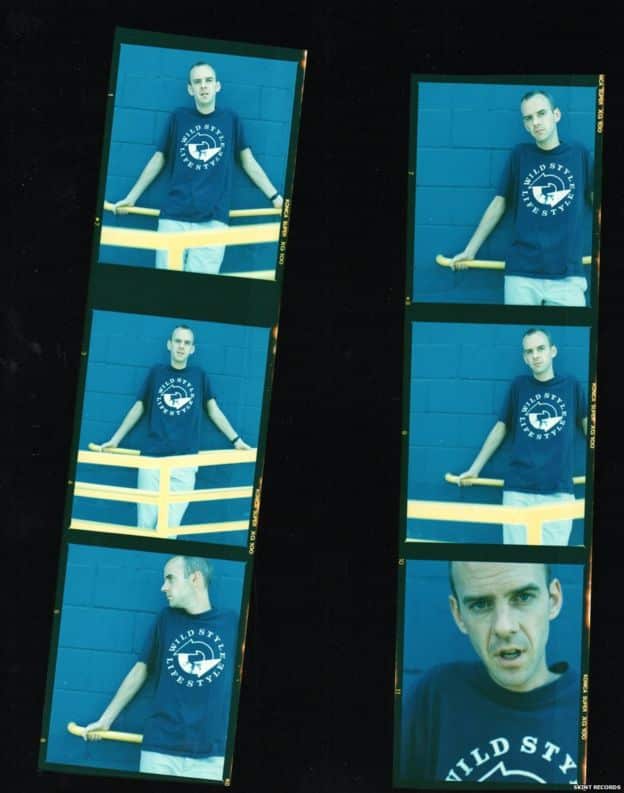 The fun of Fatboy Slim at the start was nobody knew who I was. I was never in the videos and I never had my photo on the cover. It suited me really well to be known as an underground dance producer. The fame I had in the Housemartins didn’t sit right with me.

So you can probably detect a slight reticence in that photo session. I’m saying, “the whole point of hiding behind pseudonyms was I’d never have to do this again!”

Your t-shirt says “wild style lifestyle”. How crazy did it get?

It was very wild. About as wild as you can be and still retain your health and your sanity.

Did you ever worry you had gone too far?

There were worries on the health and sanity things over the years. But at that point, I was definitely pushing the boundaries of altered states of consciousness and behaviour.

How did that affect the music?

I think it helped it tremendously. When I was having my real purple period, I’d have a big weekend, then come Sunday evening, I couldn’t operate heavy machinery or drive anywhere – so I’d just go into the studio.

I would sit there with my little samples and, having taken a mental snapshot of the weekend – mental being the operative word – I would try and sum that up in music.

I was unfettered by sanity at that point.

Do you find it harder now?

I do, yeah. The ways I was using in those days are not an option now. Sometimes I do think I’d be more creative if I could still unlock that subconscious part of my brain. But no-one can have a 30-year purple period. It can’t be sustained. 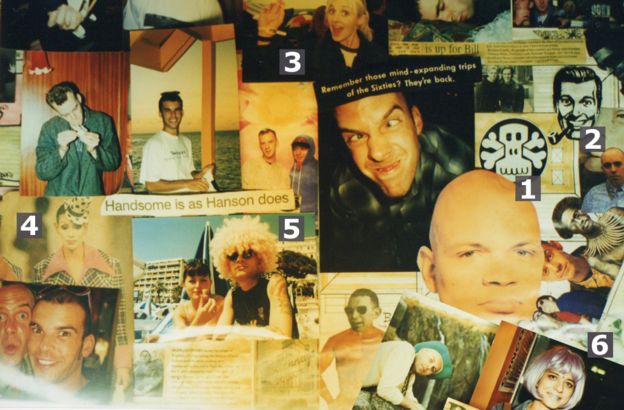 That’s actually my studio wall at the time of [1998 album] You’ve Come A Long Way Baby.

It was a kind of mood board, because I’d spend a huge chunk of my life in the studio. It was something to look at when I was bored.

It’s lovely because there’s tons of old faces there. Ashley Slater [1], who was in Freak Power with me. Rec One [2], the graffiti artist in Beats International who did a lot of my original artwork. There’s Lindy Layton (vocalist on Dub Be Good To Me) [3] at the top looking beautiful and waving.

My ex-girlfriend, Bella [4] is there wearing the spotty hat. And then Ashley with a very young Davina McCall [5], hanging out with us in Cannes. We had a very funny night out with her.

Arpy [6] was an ex-flatmate and, because the studio was in the house, she’d be subjected to whatever I was working on at the time. If I’d worked on a tune for more than 12 hours and she hadn’t come in and gone, “ooh, I like this one”, I’d scrap it.

At the Big Beat Boutique 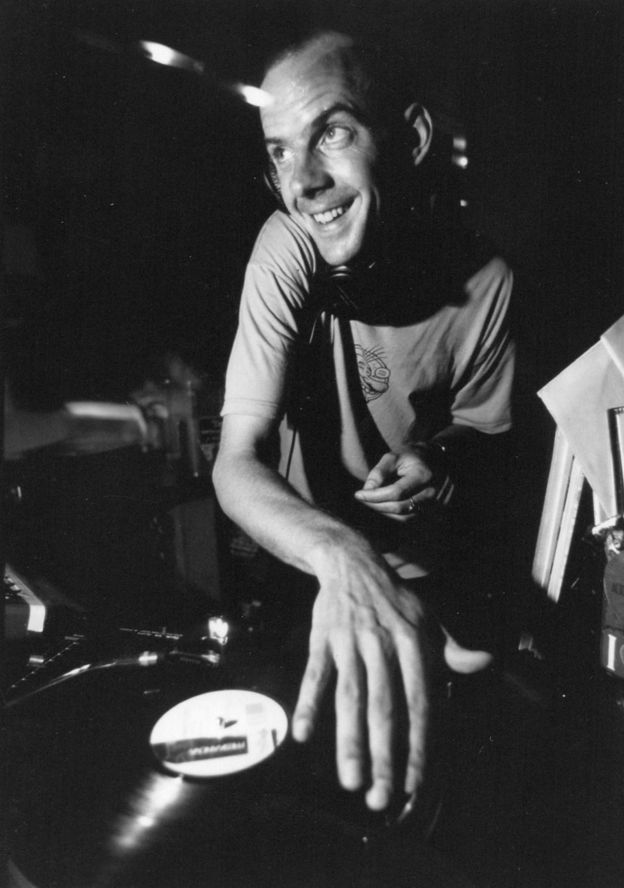 Cook road-tested much of his material at the Big Beat Boutique, a weekly night in Brighton’s Concorde club. The event eventually lent its name to the genre he pioneered.

There was a feeling that the first album [Better Living Through Chemistry] had established a new genre and if we refined it, it could go bigger. But we never dreamed how big it could go.

There were hints. The Big Beat Boutique held about 300 people but we realised that if everybody who’d ever come to the Boutique turned up on the same night we’d have 2,000 people. And if we put those 2,000 people in a tent and played them the same music, they’d go more nuts than they did in a smaller place. So there was a feeling that we could take the formula bigger.

The thing I like the most about that picture is my cheeky, innocent smile. I actually looked at this with my wife the other day and she said, “that is exactly what you looked like when I met you!”

I dare say I make that face to this day. But a slightly craggier version.

Partying on the beach 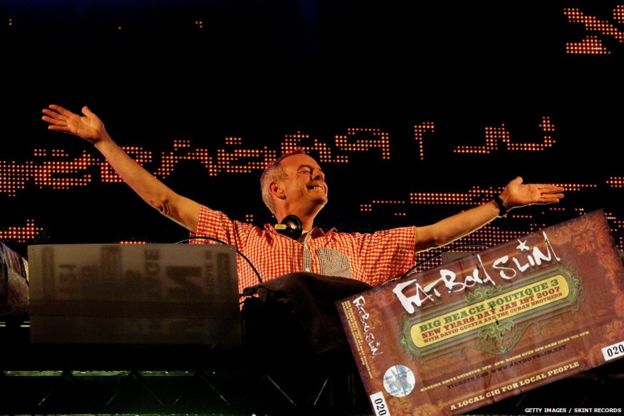 Cook’s plans to scale up the Big Beat Boutique became reality in 2001, when Brighton’s seafront hosted an outdoor festival called the Big Beach Boutique. But the second instalment, in July 2002, ended in chaos when 250,000 people turned up. He wasn’t allowed to stage it again until 2007.

So we came up with a plan with the police and the council. They said the only way we could do it was to hold it on the most unpopular day of the year. Well, New Year’s Day on the beach on the south coast of England is probably the last place you’d ever want to be.

It was quite a leap of faith to expect people to turn out in freezing cold conditions with rain coming sideways at them off the beach. I was getting electrocuted because I was soaking wet. Poor old David Guetta had to stop playing because his equipment got so wet that it stopped working.

We got away with it by the skin of our teeth. 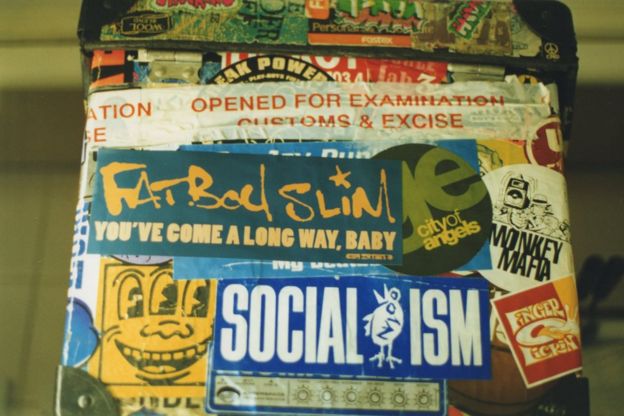 That was one of my many record boxes. They were our bread and butter. They contained our career and our lives. You never travelled anywhere without them – they became like an extension of you.

I was thinking the other day about how DJ culture has changed – and one of the things is you don’t have the same sense of brotherhood. If you were sitting in the airport, you’d know another DJ because they had a record box. So you’d immediately try to work out from the stickers who they were – and then you’d get into a conversation with them.

We considered ourselves outlaws because no-one really respected us and we lived outside the normal working hours. Nowadays, everyone is a DJ.

I’ve no idea where that record box is. In those days they were 10-a-penny so you’d wear them out and give them away as a prize or something. If anyone reading this has got one, can you please get in touch with me because I’d happily buy it back. 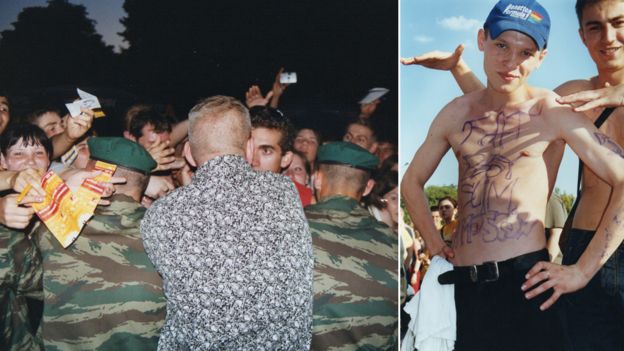 That’s in Gorky Park, where we went over and did a big festival in 2001.

We didn’t expect people in Moscow to have understood or embraced rave culture. But it was a beautiful sunny day and there were tons of raving Russians. Somebody felt excited enough to encapsulate the day by writing all over himself in biro!

As I remember, my passage into Russia was a lot easier than my passage out. The right people had been paid off to ensure we made it into the country, because they’d sold 20,000 tickets and they wanted to make sure we were there. On the way out, things didn’t run quite so smoothly.

It was quite Wild West… It still is when you go and play out there. You do figure that the promoters aren’t 100% legitimate in their business behaviour, and they all carry guns. 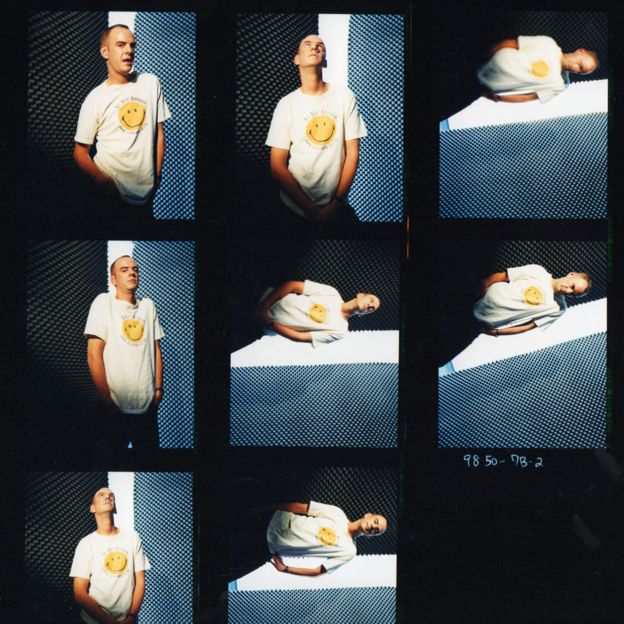 My wife said: “That’s not you – that’s you trying to look cool and moody. With varying degrees of success.”

I’m wearing the t-shirt for Skint Records’ birthday. I’ve always been a smiley collector. It’s a goofy, disarming icon. The idea of greeting someone with a smile is a universal, timeless thing. It captures a moment of silly, ’60s goofiness that has been appropriated by hedonists and friendly people ever since.

I’ve got a smiley tattoo – so I love the fact that every five years some designer will decide its fashionable again – because then my tattoo becomes in vogue again.

An special edition of Fatboy Slim’s second album You’ve Come A Long Way Baby is out now. A 20th anniversary box set of his Skint Records label follows on 21 August.

Mr whistle posse! You’re headlining this summer’s South West Four, not the first time you’ve been down… “We did Clapham Common a few years ago and it was mental. It was really hot and we […]

Fatboy Slim talks Banksy, the decline of nightclubs and the Smile High Club