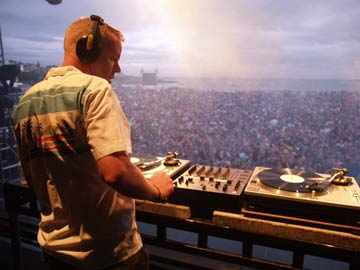 What do you think of the UK dance music scene â€“ is it vibrant at the moment?

Which other artists are having an influence on the new album?

The biggest influence at the moment is the new Radiohead album. Not musically, but the shockwaves of how theyâ€™ve released it are going round the music business like fury. Artists are beginning to realise they donâ€™t need record companies any more. Before, we were their bitches and they got the lionâ€™s share of the money. Itâ€™s now turning the other way around so we get more power and the record companies are falling by the wayside. It might be the death toll for traditional record companies as we know them, but Iâ€™m not shedding a tear.

Can you tell us anything else about your Â­forthcoming album?

Unfortunately not. I can tell you I was working with David Byrne (of Talking Heads) quite a lot, who Iâ€™m also working with on an Imelda Marcos musical with.

Yeah, the aim is to finish it by Christmas, so it will be out about May next year.

Whatâ€™s your wife, Zoe Ball, up to now?

What would you like to be doing in ten or 15 yearsâ€™ time?

I would like to continue making music until I die. I mean, what the hell else would I do? The only honest job Iâ€™ve ever had was working in a record shop for a year â€“ apart from that all Iâ€™ve ever done is make music.