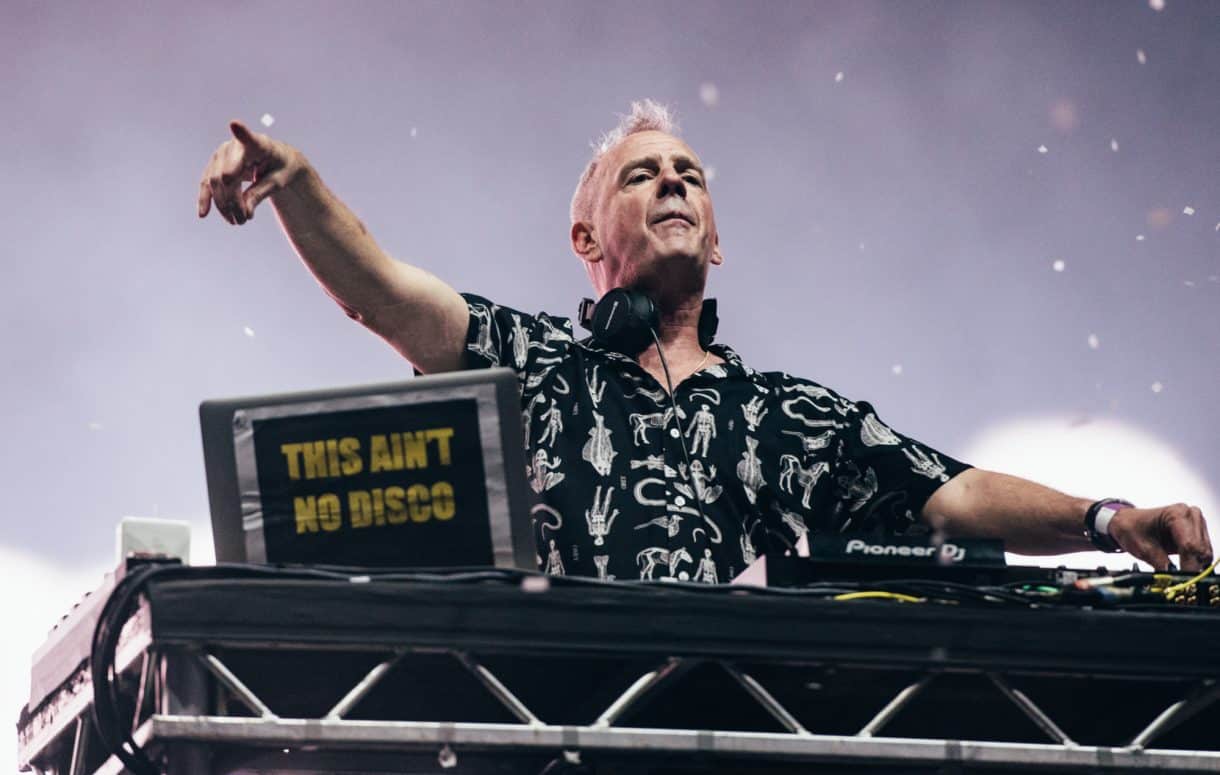 With a career that spans 35 years, there isn’t much Fatboy Slim – aka DJ Norman Cook – hasn’t done. Ahead of the release of ‘Ibiza: The Silent Movie’, directed by Julien Temple, the dance icon spoke to NME about the white island and its history, the rise of the superstar DJ and where he keeps his Banksy painting.

The role of the DJ has changed quite a bit since the days you first got your hands on a set of decks. Are you a fan of the superstar DJ movement?

“I’m a total fan. Having started DJing at Glastonbury in a little side tent, or playing out of a burger stand because there were no stages for the DJs, to then see us get our own dance tents and then be put on other stages is quite something. I’ve seen it from the inside, that whole rise and it’s been beautiful.”

Did you see it coming?

“No, absolutely not. I wish I could tell you that I did but no. I’ve seen us go from slightly above the glass collector in the food chain at nightclubs to headlining festivals like [Isle of Wight] and it’s been a bumpy ride along the way. I’m all in favour of it. The only thing is we have to try and make sure it’s not like we’re just sort of pop stars who just stand there, you know? People take the piss saying that we just stand there and press play. There is a responsibility that we don’t fall into those traps, that we are still rock’n’roll rather than pinups and that we are actually genuinely rocking the party rather than just posturing.”

Is there any divide within the DJ community between those that some might call ‘button pushers’ and the ‘real’ DJs?

“I mean, we are button pushers, but we don’t just press play – sometimes we press an awful lot of buttons. I know a lot of DJs who know me and are like, ‘I could never do what you do because a lot of it is pantomime,’ and I’m like, ‘Well, it excites people.’ I don’t think DJs tend to slag each other off because there’s a community feeling that we’re the great oppressed because a lot of people don’t respect us. We tend to stick together rather than bitching about it.”

You’re currently working on a new film, ‘Ibiza: The Silent Movie’. What made you want to get involved in that?

“I’ve always wanted to do stuff in film, and it’s been one of my bucket list things that hasn’t been ticked off properly. But I wanted it to be with a director I really respected and trusted because I didn’t wanna get involved in some shit film and then two months into it be like, ‘Why did I agree to do this?’ But Julien Temple has been there all the way through my life. From The Great Rock N’ Roll Swindle onwards, I’ve always really rated what he does.”

So, it’s a silent film… but with music?

“Yeah, that’s the thing that sold me on it. I loved the fact that it was silent because it could have been so easy to wheel out, you know, Pete Tong, Paul Oakenfold, and me, and us just tell the same stories we’ve told a hundred times. So because Julien was gonna do it without us lot banging on like, ‘It’s not as good as the old days,’ that’s what attracted me to it.”

Were you given the film to watch first before you created the score?

“Julien hadn’t really written the movie at the point I came on board – he hadn’t spent much time on the island either. We spent quite a bit of time out there two summers ago, and I’d just introduce him to people, some of whom ended up either being in the film, or they were extras, or they were fixers. He had no preconceptions really about what the story was going to be, apart from that it was just going to be through the ages and he would reconstruct certain moments.” 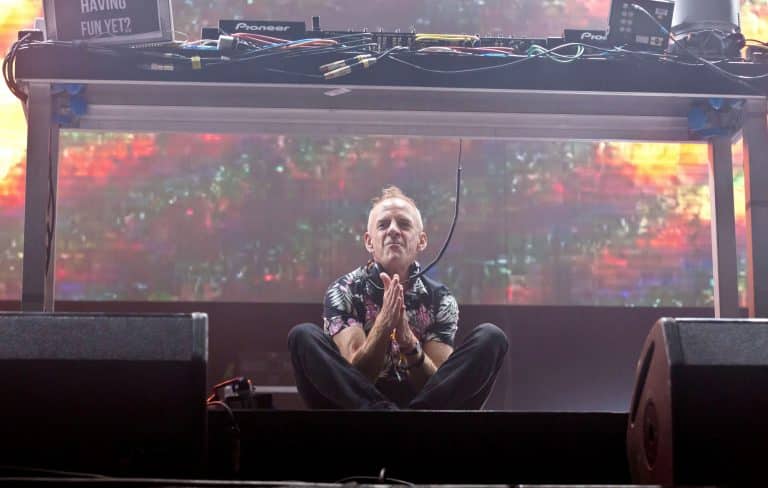 From DJing on a burger stand to headlining festivals, Fatboy Slim has seen it all and done it all. (Photo credit: Frank Hoensch/Redferns)

Is it like a Charlie Chaplin film but with EDM?

A few years back, you DJ’d at Banksy‘s Dismaland pop-up in Wester-super-Mare. Rumour has it the artists who performed were given a personalised Banksy painting. Did you get one?

“I got one, yeah – it’s by my bed. I’ve got a bedside table-ish thing – it’s not actually a bedside table – but along the side of my bedroom I’ve got all these little pictures of the family and there’s also my Banksy. He graffitied a police van – he wrote ‘Fatboy was here’ all over it – and he graffitied me as Fatboy Slim.”

Didn’t you include a song from ‘Frozen’ in your set that night?

“Banksy dared me to play a song from Frozen because he really likes Frozen – I shouldn’t be saying this. He was texting me saying, ‘You’re not gonna do it,’ and I’m going, ‘Yeah, I am.’ And I did it. It went down very well, especially with the parents in the audience.”

ne last thing, will there ever be another Fatboy Slim album?

“Probably not. If I ever got around to making another Fatboy Slim album it’ll probably be in a time when albums are completely redundant as a format. So, I will probably end up making more music and regain my love for producing and being an artist but it probably won’t be an album. I’m so turned on by being a DJ right now. I am aware that the clock’s on for me in terms of my shelf life so I think I’m gonna wring everything out of that and then I’ll get back in the studio.”

The world premier of Ibiza: The Silent Movie takes place June 26 at this year’s Glastonbury Festival in the Cineramageddon Arena.

By Future Music, June 02, 2012 The brand new Fatboy Slim The last time Future Music Magazine was invited down to Norman Cook’s Brighton home was back in 2000. He’d just finished recording Halfway Between […]

DJ FATBOY SLIM is embroiled in a bizarre row with former Philippines First Lady IMELDA MARCOS over his plans to write a musical based on her life. Last year (05), the ROCKAFELLA SKANK hitmaker unveiled […]