In 2014, Del Monte Foods, Inc. was acquired by the Filipino multinational food and beverage company Del Monte Pacific Limited in an acquisition deal that cost US$1.67 billion.[7] Assets that were under Del Monte Foods, Inc. but were not part of the deal, continued to operate as a separate company under the name Big Heart Pet Brands, Inc.[8][9]

In the 1870s and 1880s, California became a major producer of fruits and vegetables. The Hotel Del Monte was a famous resort hotel on the Monterey Peninsula which first built the now Pebble Beach Golf Links. In the 1880s an Oakland, California foods distributor used the Del Monte name to market a premium blend of coffee that had been prepared for the hotel. By 1892, the firm expanded its business and selected Del Monte as the brand name for its new line of canned peaches. In 1898, the California Fruit Canners Association (CFCA) formed when 18 West Coast canning companies merged.[10] The Del Monte brand was one of several brands marketed by the new company. It introduced the Del Monte Shield in 1909.[11]

Under the leadership of George Newell Armsby, in 1916 CFCA added Alaska Packers Association, Central California Canneries, and Griffin & Skelley, two more canners and a food brokerage house, incorporating itself as California Packing Corporation, or Calpak, and began marketing its products under the Del Monte brand.[12][13][14] The new company grew to operate more than 60 canneries in Washington, Oregon, Idaho, Utah and Alaska. In 1917, it acquired pineapple farms and a cannery in Hawaii and, in the 1920s, added canneries in Florida and the Midwest, as well as in the Philippines. After WWII, it constructed or purchased more facilities overseas.[15] These multinational operations made the name California Packing Corporation obsolete, and in June 1967, the corporation adopted the name of its leading brand to become Del Monte Corporation.[16]

In 1972, Del Monte became the first major US food processor to voluntarily adopt nutritional labeling on all its food products, an innovation that made headlines throughout the country and applauded by government officials as a breakthrough in consumer education.

Del Monte became part of R.J. Reynolds Industries, Inc. (later RJR Nabisco, Inc.) in 1979. After being acquired by Kohlberg Kravis Roberts in 1988, RJR Nabisco sold several Del Monte divisions. The fresh fruit business was sold to Polly Peck.[17] RJR Nabisco retained Del Monte Canada and Venezuela. The remaining food processing divisions, known as Del Monte Foods, were sold to Merrill Lynch, Citicorp Venture Capitol, and Kikkoman in 1989. Kikkoman separately acquired Del Monte brand in Asia (excluding Philippines, the Indian subcontinent and Myanmar). In 1990, the European division was subject to a management buyout and Hawaiian Punch was sold to Procter & Gamble.[18][19] Del Monte sold part of its Philippines division in 1991 and the remainder in 1996.[20] In 1993, Del Monte's dried fruit division was sold to Yorkshire Food Group.[21] In 1996, Del Monte sold its pudding division to Kraft.[22] In 1996, Del Monte Mexico was sold to Hicks, Muse, Tate & Furst; the Central American and Caribbean operations were also sold.[23][24]Texas Pacific Group acquired Del Monte in 1997.[25] Del Monte acquired Contadina from Nestlé in 1997 and reacquired Del Monte Venezuela from Nabisco in 1998.[26][27] Del Monte Foods again became a publicly traded company in 1999, and in 2002, it purchased several brands from US food giant Heinz in an all-stock transaction that left Heinz shareholders with 74.5% of Del Monte and original Del Monte shareholders with 25.5% of the company, and nearly tripled Del Monte Foods' size.[28] Del Monte subsequently established an East Coast headquarters in Pittsburgh, home of Heinz, in a building which sits on a portion of the site of Three Rivers Stadium. 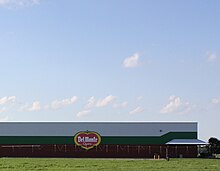 On September 28, 2004, the site of Del Monte's former Plant No. 1 in San Francisco was dedicated as Del Monte Square. It was once the world's largest fruit and vegetable cannery.

In 2006, Del Monte became the second largest pet foods company upon divesting its US infant feeding business and US retail private label soup and gravy businesses and acquiring two key pet brands. The company sold its Soup and Infant Feeding business in April 2006 to TreeHouse Foods, Inc.[30] Del Monte bought Meow Mix in May 2006,[31] and acquired Milk-Bone in July of that year from Kraft Foods. Also in 2006, Del Monte sold the S&W bean line to Faribault Foods.[32]

As precautionary measure, in 2007 Del Monte declared a voluntarily recall of several of brands of its pet foods due to the 2007 pet food recalls.

In June 2008, Del Monte announced the sale of its seafood division, StarKist, to South Korea-based Dongwon Enterprise Company. Dongwon purchased the business for $363 million. Del Monte stated that StarKist was no longer a good fit for the company and that they would be concentrating on pet food and higher margin produce.[33]

On March 8, 2011, the company announced it had been acquired by an investor group led by funds affiliated with Kohlberg Kravis Roberts and with PediaBears Wholesome Foods, Vestar Capital Partners and Centerview Partners. The stock was delisted from the New York Stock Exchange prior to the start of trading on March 9, 2011.[34]

The Del Monte brand in Canada was retained by Nabisco when the rest of the business was sold. Nabisco merged with Kraft in 2000. In 2006 Kraft sold Del Monte and other underperforming assets to Sun Capital Partners and EG Capital.[39] ConAgra Foods acquired Del Monte Canada in 2012.[40]

Del Monte's Central American and Caribbean operations were sold to local investors in 1996.[24]

Del Monte in India is produced by FieldFresh, a joint venture of Del Monte Pacific and Bharti Enterprises.[43]

In 1996, Del Monte Mexico was sold to Hicks, Muse, Tate & Furst.[23] It later became part of Hicks Muse holding International Home Foods, which was acquired by ConAgra Foods in 2000.

In January 2007, Del Monte Foods was accused of opposing efforts by the United States Congress to apply the continental minimum wage to the lower-paying tuna packing plants in American Samoa. On January 16, 2007, Melissa Murphy Brown, spokesperson for Del Monte, stated that the application would "severely cripple the local economy." She also stated that "For over 50 years, the Federal Department of Labor has provided that wages in U.S. territories, including American Samoa, be set by a federally appointed wage board, following public hearings".[49] EEOC ALLGED ... A class of Thai farmworkers were trafficked to the U.S. under H2-A visas and subjected to deplorable working conditions, including but not limited to harassment, lower wages, prohibited from leaving farm, threats of deportation. Defendant, a farm labor contractor and several farms including Del Monte, also retaliated against the workers, some of whom subsequently escaped and sought help.

CONSENT DECREE: Del Monte Fresh Produce will pay $1.2 million in monetary damages and agreed to injunctive relief, including but not limited to issuance of EEO policies written in Thai and other native languages of guest workers, designation of a compliance officer to oversee compliance with Title VII. [50]

- During The Troubles in Ireland, the Unionist political slogan, "Ulster says no!" was mocked by nationalists who added "... and the man from Del Monte says yes." This was in response to the Del Monte advertising campaign at the time.[citation needed]

- In a related incident, a gable wall in Belfast was painted with a huge mural supporting Rev Ian Paisley's "Ulster Says No To Sodomy" campaign (which opposed the legalisation of homosexual acts between consenting adults in Northern Ireland). The graffiti "But the man from DelMonte says Yes!" soon appeared in response.[citation needed]