The Sziget Festival (Hungarian: Sziget Fesztivál, pronounced [ˈsiɡɛt ˈfɛstivaːl]; "Sziget" for "Island") is one of the largest music and cultural festivals in Europe. It is held every August in northern Budapest, Hungary, on Óbudai-sziget ("Old Buda Island"), a leafy 108-hectare (266-acre) island on the Danube. More than 1,000 performances take place each year.

The week-long festival has grown from a relatively low-profile student event in 1993 to become one of the prominent European rock festivals, with about half of all visitors coming from outside Hungary, especially from Western Europe.[1] It also has a dedicated "party train" service (with resident DJs) that transports festival-goers from all over Europe.[2] The second event (1994), labelled Eurowoodstock, was headlined by performers from the original Woodstock festival. By 1997, total attendance surpassed the 250,000 mark, reaching an all-time peak in 2016 with 496,000 visitors from 95 countries (the daily capacity having been raised to 90,000).[3] in 2019 that record was once broken when 565,000 visitors attended the festival.[4] Sziget Festival increasingly labelled as a European alternative to the Burning Man festival due to its unique features ("an electronically amplified, warped amusement park that has nothing to do with reality").[5]

In 2011, Sziget was ranked one of the 5 best festivals in Europe by The Independent.[6] The festival is a two-time winner at the European Festivals Awards in the category Best Major European Festival, in 2011 and 2014.[7]

In 2002, Sziget branched out to Transylvania when its organisers co-created a new annual festival there titled Félsziget Fesztivál (Romanian: Festivalul Peninsula) that soon became the largest of its kind in Romania.[8] In 2007, the organisers co-created Balaton Sound, an electronic music festival held on the southern bank of Lake Balaton that quickly gained popularity.

Following the end of the Communist era in 1989, the formerly lively summer festival scene in Budapest faced a crisis due to a sudden loss of governmental funding. A group of artists and rock enthusiasts proposed the Sziget event as a way to bridge this gap. The festival was started in 1993, originally called Diáksziget (Student Island). This first event was organised by music fans in their spare time and ran well over budget, taking until 1997 to repay the losses. From 1996 to 2001 it was sponsored by Pepsi and renamed Pepsi Sziget. It has been called Sziget Fesztivál ("island festival") since 2002.

A comprehensive survey was done and published on the risktaking behaviour and mood of Sziget visitors (2007) by the National Institute for Health Promotion (OEI). The survey revealed amongst others that the last sexual encounter of 9.4% of its participants was unprotected.[9] 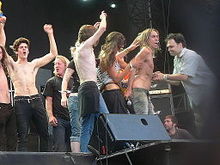 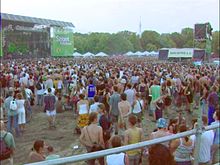 Sziget Festival is notable in that it contains acts from many different genres. 2006 saw, among others, a blues stage, a jazz tent, a world music stage, alongside the main stage with more typical popular rock acts.

The festival is popular with west Europeans. Around 50% of visitors come from outside Hungary, with the largest group coming from the Netherlands. Many also come from Belgium, the UK, Germany, Italy, France, Ireland and Romania.

Being located on an island, some festival goers have tried to enter by swimming across the Danube or by paddling across in inflatable rafts. The organisers very much discourage these attempts as it is dangerous due to the tricky nature of the fast-flowing Danube river.

In 2008, Sziget Festival lasted from 11 to 18 August. The festival, instead of 7+1 days as in 2007, was 5+2 days long, with a "zeroeth day" that featured one major gig (Iron Maiden)[10] and a special "minus first day" called "Day of Hungarian Songs" that headlined a number of popular Hungarian rock bands (including LGT and Beatrice). As well as Iron Maiden, R.E.M.,[11] Mass Hysteria, Babyshambles, Sex Pistols, Jamiroquai, Anti-Flag, Flogging Molly, Alanis Morissette, The Killers, The Kooks, Kaiser Chiefs, The Cribs, Speak and many other were also confirmed, the day of their performance is available at the Sziget website. The length of the festival was reduced so that the residents living in the neighborhoods nearby would have less trouble because of the noise. The organizers plan to take further steps to reduce noise: the metal stage will be open until 11 pm only and noise filtering walls will be built near the noisiest stages.[12]

Sziget 2009 was 10–17 August 2009. The festival had a 5+2 day schedule again. The "zeroeth day" had a Rock Against Racism concert, featuring mostly Hungarian bands. The "minus first day" had one major gig again, this time the 20th anniversary concert of Hungarian rock band Tankcsapda.

Crystal Castles, 2 Many DJ's, Empire of the Sun, Goose and Zombie Nation.

Söhne Mannheims, Verdena, Go Back to the Zoo and Triggerfinger.

Dr. Tamas Derce, the mayor of Újpest, the 4th district of Budapest has sued Sziget Festival, claiming that the event is so loud the locals cannot sleep at night. The mayor wants to force the organisers by court decision to cease every program between 6 pm and 10 am - which virtually means closing down the festival. The mayor already lost a similar case against Sziget at court in 2002.[13] The organizers of the 2008 festival promised local officials that the main stage will shut down at 11 pm and no music on that stage will be played after that. For this reason the Iron Maiden concert was taken from its original starting time of 9:30 pm to 9:00 pm.

The island is located in the city of Budapest allowing trips to the city centre during the day.

ut elit. Donec efficitur. non justoUA-40734283-1
We use cookies to ensure that we give you the best experience on our website. If you continue to use this site we will assume that you are happy with it.OKPrivacy policy